Why would anyone want to read about a game that is almost 40 years old, let alone write about it?

Well, there are lots of answers. One of the best is that sometimes a game manages to give something that stays interesting no matter how long its been around. And while its not exactly fair to compare Bar Lev to Monopoly or Scrabble, it does have a cult following that has never died. On top of that, its innovative combat systems are still fun to play even today.

Besides, its not quite gone. You can still find copies of Bar Lev (designed by John Hill and published by Conflict Games in 1974) out in the world of E-bay END_OF_DOCUMENT_TOKEN_TO_BE_REPLACED

“The Battle of Bannockburn (Blàr Allt a’ Bhonnaich in “Scottish Gaelic”) (24 June 1314) was …. one of the most decisive battles of the First War of Scottish Independence, and remains one of the iconic cornerstones in the History of Scotland….

Edward (II of England) came to Scotland in the high summer of 1314 with the preliminary aim of relieving Stirling Castle: the real purpose, of course, was to find and destroy the Scottish army in the field, and thus end the war. England, for once, was largely united in this ambition, although some of Edward’sgreatest magnates and former enemies, headed by his cousin, Thomas of Lancaster, did not attend in person, sending the minimum number of troops they were required to by feudal law. END_OF_DOCUMENT_TOKEN_TO_BE_REPLACED 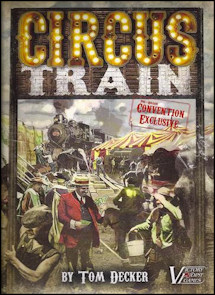 When you slide Circus Train out of its protective sleeve, the first thing to catch your eye is its garish, poster-bright red cardboard case.

Open it, and you are dazzled by a rainbow of laser-cut cardboard markers that must be  snapped apart to play the game…a kaleidoscope of shapes and colors that will become your clowns and elephants, lions and horses, the human cannonball and the sideshow freaks.

The game is remarkably simple. All you have to do is start your Circus Train out in Canada, then go to different cities END_OF_DOCUMENT_TOKEN_TO_BE_REPLACED