Sacre Bleu, what is this? Ah, a clever cooperative card game about WWI French troops in the trenches, with a strange way of being cooperative, but The Grizzled works.

The goal? Survive. No path to glory. No Anthill to take. Just survive long enough to end the war in one piece, or at least with fewer than four wounds.

My set up as Charles Sauliere with coffee chits. Note the war pile (upper left corner), speech tokens, and peace pile (next to box). Sauliere’s lucky charm is rain, which triggers discards.

In the setup, the cards are divided into a peace pile (25 cards) and a war pile (35 cards). The object is to empty the peace pile so that peace is declared. At the end of every round, at least three, sometimes more, cards from the war pile are stacked on the peace pile. As you can guess, you better make sure you discard more cards than you transfer.

Each player gets three cards from the ‘peace’ pile at start, although in subsequent rounds, you can increase or decrease the number dealt — understanding that at the end of the round (called a ‘mission’ in game vernacular), you transfer at least three cards from war to peace.

The mission leader plays one card, and then the next player plays a card, and so on with the goal of NOT playing a card that will result in three attributes appearing on the table. If this occurs, then the mission is a failure and not only do you transfer three or more cards from the war pile to peace pile, you also shuffle the cards on the tabletop back into the peace pile for a double whammy. If you’re about to play such a card, you can ‘withdraw’ from the mission and allow other players to play cards. When all withdraw, the mission ends.

For not dying (automatic game loss for all if one player dies — shades of the Three Musketeers all for one and one for all!), you get a ‘speech’ token. Instead of playing a card, you can give a speech naming an attribute. All other players may discard one card with that attribute.
Speech is one of those mechanics that needed to be added to balance off the preponderance of attributes.

Wound cards get played on yourself. When you get four wounds (some cards give two wounds instead of one), you die and game over. Four is an oddball number. My uninformed guess is that playtesting started with three, but that proved too lethal. It’s hard enough with four… 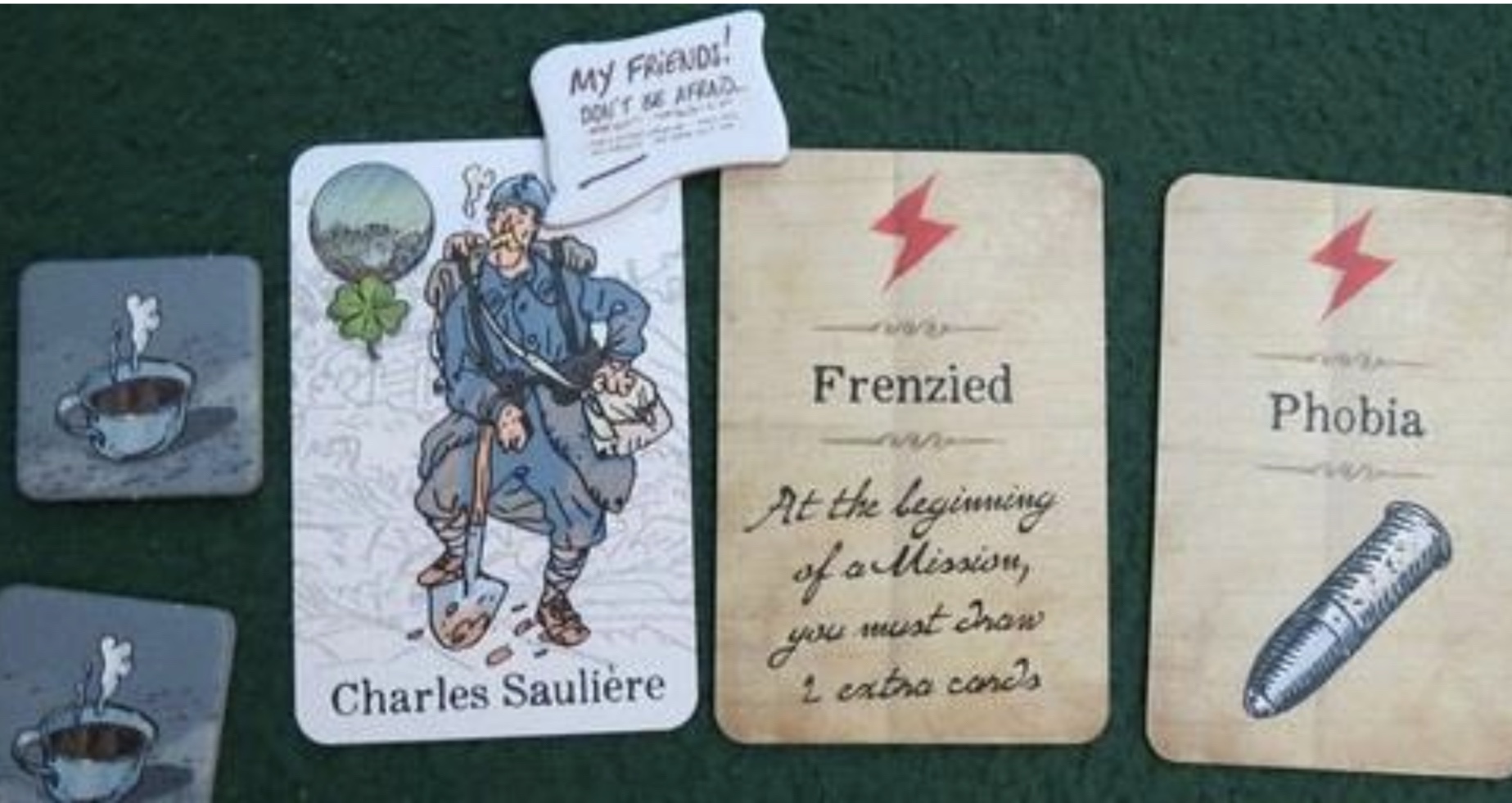 …So, at the end of the mission, you pass coffee chits to each other. The one with the most chits gets to remove two wound cards. Part of the cooperation is determining who should get the chits if possible, as they can only go so far (player to left, player two to left, etc.). With three of us, not that much of a problem, but, one of the wound cards makes the player pick a random direction for the coffee chit and other wound card deletes them from the game.

Per usual, we screwed up the first game by inadvertently stacking the deck in our favor. We beat the system quite handily because we never transferred cards from the war pile to the peace pile. The only reason we checked is because Rory played a number of games and never beat the Grizzled system. So, we re-checked the rules. Ooops.

Third time’s the charm. We played the game right and it was a tight
game going down to the last few cards in the peace pile before Rory succumbed to wounds and we lost.

Now, that was a close game. We figured out how the system worked, the cards offered enough randomness between games to keep ’em interesting, and the decision points came fast and furious each round. It’s also a good three- player game.

The odd part in all this is that the rules prohibit players from telling others what cards they have in hand, which doesn’t make it exactly cooperative. In fact, there’s a wound card called Mute that prevents a player from speaking at all.

The only cooperation safe to utter is the number of individual attributes showing on the table. I’m not sure about grunting, but I guess you can talk as much as you want when playing the speech token and making a speech about discarding a card with a particular attribute.
Grizzled is worth playing again and probably enough times until we beat the system. After that, maybe, maybe not so much. But we have to beat the system first.

Grizzled is worth playing again and probably enough times until we beat the system. After that, maybe, maybe not so much. But we have to beat the system first.

He is currently a freelance editor and writer covering financial and defense news, with a concentration on the retail industry. If you are really interested, go to Linked In, where he maintains a profile.

On the miniatures front, you may have seen his byline in various hobby publications in the 1990s and 2000s. Lockwood is also the author of: Snappy Nappy: Simple, Subtle & Ultrafast Miniature Rules for the Napoleonic Era, and, Hyperspace Hack: Ultrafast Spaceship Fleet Battles with Miniatures (both published in 2009 and available from http://www.onmilitarymatters.com and http://www.caliverbooks.com).  Lockwood is also the editor of the Secrets of Wargame Design series, releasing the fifth volume in 2015.