Oliver Cromwell, who boasted a head rounder than Charlie Brown, delivered the best line at Parliamentary Comedy Club: “The act of regicide was a cruel necessity.”   Hence the title for a solitaire board game of the English Civil War pitting you, as a split Puritan personality called Parliament, against a host of Royalists in support of papists Chuckie and Chuckie the Sequel.

Play moves quickly enough because all Royalist actions (armies advance, battles, greater religious influence, etc.) are controlled by cards. Flip a card, do what it says — primarily moving influence markers up and down, moving one or more armies converging on London, and fighting a battle. Then you do ‘your’ Parliamentarian turn.

Your actions consist of using ‘Zeal Points’ to try and move influence markers up and down, try and repel one or more armies converging on London, and to try various other things. All these actions require a die roll — roll well and succeed, roll poorly and fail to influence anything. When you reach certain conditions on the influence track, you gain victory points by grabbing cards immediately and for keeping your influence high at the end of the game. 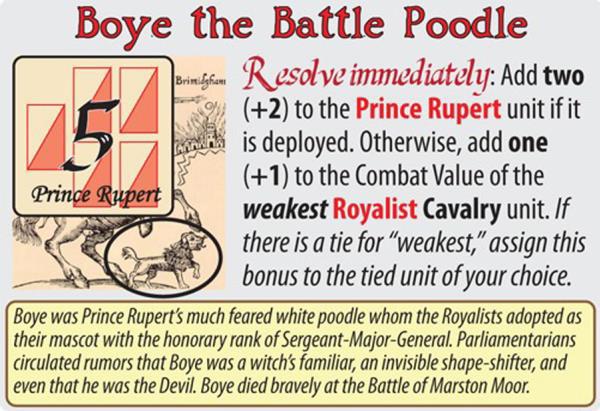 As for repelling armies, spend a Zeal Point and roll well. Success sends the army back a province. Failure means it sits in place.  As for the battles, draw infantry and cavalry units at random, line them up face down on the battle board, flip them over in a particular order and roll dice per section of the tactical battle. Win enough sections to win the battle and get bonus points to spend on influence and such.

Barring better than average die rolls, I almost never won a tactical battle — mostly draws — UNTIL one of the event cards gave me Cromwell. If Cromwell wins his section of the tactical battle, he gives a big +3 die roll to the adjacent section. Once obtained, I always juiced him with a +1 Zeal modifier to help ensure a win.

On the down side, if a ‘named’ unit suffers a loss, you roll for its survival. Named units (like Cromwell) are almost always worth more than generic units. 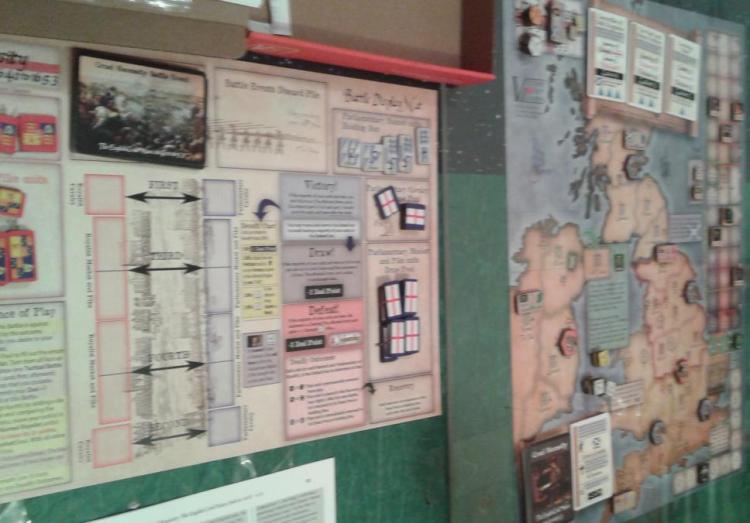 CN contains three sets of cards for three scenarios (or one big honkin’ campaign game). That’s the good news. Bad News: I’m not sure how much skill influences the game’s outcome.

You see, there’s not much of a rock-paper-scissors aspect to this game. You roll a die and obtain success or failure. Your only impact is paying 1 Zeal Point to gain a +1 die modifier token to place in ONE spot per turn. The placement of that token represents the main level of skill.  I tried the ‘even’ approach of scattering Zeal Point die rolls across armies and influences. I also tried concentrating on one aspect or another. For example, I tried repelling the armies. If you keep rolling low, it doesn’t matter what you do, your strategy will fail. Or if you are looking to boost influence because one notch up will finally get you a VP card, sometimes rolling a 5 or 6 on a d6 seems impossible. You can’t sling resources around (except the one +1 DM token) to raise more units, train them up, or concentrate them against one army.
In another example, winning tactical battles depends on when Cromwell shows up. Get him early and a win (or at least a draw) seems a lot easier than pulling him from the deck late in the scenario.
Turns do go by quickly once you get the hang of the sequence of play.

First, let me praise the rules for their general completeness. The main conundrum (finally solved with a sentence buried in an extended example) was moving the influence ‘up’ and ‘down’ on a chart with levels labeled A through F. To save you any future trouble, up means towards A (good for you), down means towards F (bad for you).

Not too bad at the beginning of a second game. Edinburgh is sieged, but the other Royalist armies have been kept at bay. Influence looks good. Cards at lower left tell you what to do in the ‘Royalist’ part of the turn. Note clever cut out in city hex counters – you rotate to indicate siege strength.

On the downside, the full-color rule booklet is riddled with multi-color text, which seems to be boldfaced and colored every third word. It became a chore to read compared to plain ol’ black ink on white paper. The equivalent would be back in the 1980s when multitudes of fonts first came into popular use and every office memo looked like a ransom note.

The other conundrum we solved by phoning Victory Point Games and speaking with the developer, Alan Emrich. This had to do with the cards having a battle listed with multiple armies. We originally played that we fought multiple battles: one per army listed (sometimes three and four per card). Not so. You fight one battle — the armies listed are separate and move per usual.

Great customer phone support (they do e-mail, too) in a pinch, or we got lucky that Alan was in.
However, although game was released a couple years ago, searching the VPG website revealed no links for errata of CN — a shortcoming for game support.
CN is advertised as good for cooperative play, but not really. Two of us tried, but we found it better to alternate a complete turn each rather than try to figure out what to do together.

CN offers excellent look and feel, quality components, and clever mechanics. As usual with a new wargame, the first few playings are the best because you haven’t figured out everything. After a while, as you see the system in action, the allure diminishes, but up until that time, Cruel Necessity is a Gentle Possibility for your wargame table.

He is currently a freelance editor and writer covering financial and defense news, with a concentration on the retail industry. If you are really interested, go to Linked In, where he maintains a profile.

On the miniatures front, you may have seen his byline in various hobby publications in the 1990s and 2000s. Lockwood is also the author of: Snappy Nappy: Simple, Subtle & Ultrafast Miniature Rules for the Napoleonic Era, and, Hyperspace Hack: Ultrafast Spaceship Fleet Battles with Miniatures (both published in 2009 and available from http://www.onmilitarymatters.com and http://www.caliverbooks.com).

Lockwood is also the editor of the Secrets of Wargame Design series, releasing the fifth volume in 2015.

Reviewer Russ Lockwood points out myriad features of Cruel Necessity, and while mostly factual, some err while others would benefit from further elaboration. Without further ado…

Battles on the tactical battle board are heavily weighted toward DRAW outcomes prior to the arrival of Cromwell; this comes from an observation of history, and designer John Welch was quite intentional about its inclusion in the game. It not a bug; it is a feature.

“Bad News: play become repetitious after several games.” Well, one could say that about most of the games in any player’s collection, I’m sure; perhaps not all of them, but most. Cruel Necessity being a somewhat scripted solitaire game (each of the three English Civil Wars has its own deck of cards), this is not an unfair remark as such, but players have found immense replayability just trying to “crack” the game and dialing in some consistent Parliament victories.

No, the game does not sport a rock-paper-scissors aspect (I didn’t know that was a requirement for any game and was surprised to even see that mentioned here), but there is far more skill in the game than placing a single die roll modifier marker! I sense the reviewer has not developed sufficient rapport with the game to have chalked up a lot of wins (if any) before asserting this condemnation, and therefore is slighting the considerable Big Picture strategic decision making that Cruel Necessity has to offer. There is much that can be (and has been) written about this compelling aspect of play by the players themselves on other forums.

To clarify, “up” and “down” the vertical tracks, not surprisingly, means exactly that, moving the marker, literally, up or down those tracks, as the rules state. {Up is always good for you; down is always  bad.) The aforementioned “grade” letters of “A” through “F” only affect one’s ability to purchase Achievement cards (the equivalent of “going on quest” in other, non-war-, games) and to secure their benefits and permanent victory points. These are discussed, properly, in the Purchase an Available Achievement Card rule [8.2] which comes before engaging in politics [8.7]. I’ve never heard of other players finding a quandary with that, but that doesn’t mean it hasn’t happened or that this distinction could not have been further elaborated upon – that was a simple judgement of “rules weight” and getting the proper value per word added to the rules, and I chose not to further belabor that point. With that being said, these really are two separate and distinct matters being convoluted into one in this review.

The other confusion, answered by myself in a phone call, I think is clearly stated in the rules (but then I would say that, as I developed and edited the rules!). You conduct only a single Tactical Battle and apply its result to either the North or West Army unit (your choice). That’s what I see as I just-now re-read that rule, but we being humans, your mileage may vary (as the reviewer’s did).

That there is no errata posted on our website is not a “shortcoming for game support.” It simply means the game has no errata; that should be considered a virtue in a wargame, not a point of shame.

The review notes that, “As usual with a new wargame, the first few playings are the best because you haven’t figured out everything. After a while, as you see the system in action, the allure diminishes…”. To that I would reply that merely “seeing the systems in action” is not the same as discovering the winning strategies for besting this tough, solitaire game. I believe most solitaire gamers play the first few times to make sure they’ve figured out all the mechanics properly, and then several times more times in an effort to win as consistently as they can – thus the allure increases with repeated play to the point of mastery, it does not diminish.

As I write this [Dec 2015], Cruel Necessity has about 300 ratings on Boardgame Geek averaging 7.82 out of 10, which is an excellent score among that most particular audience. After two years of publication, today Cruel Necessity stands at #9 on our top games sales chart for the last 60 days, and that’s also saying something in light of all the new releases it must compete with from Victory Point Games! The great Cole Porter tune Fifty Million Frenchmen Can’t be Wrong comes to mind here… I think players late to the Cruel Necessity party will be happy discovering what so many already know.

We like to hear from you.  Please feel free to leave your comments below.