Sergeants Miniatures Game is a Lost Battalion Games release depicting skirmish-level WWII combat on the Western Front in 1944. The game comes with eight pre-painted 20mm miniature soldiers (four U.S., four German), numerous map tiles, tons of cards, two rulers and a rulebook. The core system is built around the use of Action Cards, with each soldier contributing his personal Action Cards to the main draw deck for that side. Individual soldiers each have a unique set of skills and attributes that are represented by their ratings in a variety of categories and complemented by the types of Action Cards they possess and then feed into the master Action deck.

Each turn is driven by the revealing of Story Cards which set the parameters for the turn, dictating which actions (Hide, Look, Move or Shoot) can be conducted this turn by each side and in what order these actions can occur. These Story Cards also cleverly generate unusual events (lightning strikes, artillery barrages, mandatory shots, berserk charges, etc.) that will take place during the turn. In addition, before the game even starts, randomly drawn Orders Cards provide each side with a secret mission, awarding Victory Points for the successful completion of that mission. During the course of the battle, soldiers can become wounded, pinned and, of course, killed. The map tiles are all rated for their generalized effects on the game in relation to the four main actions mentioned previously (this abstracts the type of terrain in the map tile). These various mechanics all meld into a swirl of card play, punctuated by their tangible effects on the miniature soldiers on the map. As such, SMG presents the gamer with an interesting enigma. It’s a schizophrenic product that has so much going for it and yet so many factors that may irritate potential players.

First off, it is a very expensive game series to even get started with ($100 for the starter set, $60 for the expansion, $40 per team of four figures, etc.) and this is probably a prohibitive level of expense for a large segment of the gaming population (especially in this economy). But yet, the game is actually a bargain when you consider that the physical components are absolutely top-shelf and the overall quality is well worth the money spent. Secondly, it is a physically attractive game with beautifully pre-painted 20mm miniature figurines, sturdy precisely-crafted fiber board puzzle piece map tiles and nicely rendered terrain artwork on those tiles. Conversely, the playing card artwork is very cartoony (which may not appeal to serious “grognards”) and the outlying border area art is …well… strange to say the least. The Story Card areas have “ying-yang” symbology, the Soldier Card holding boxes possess a “Mens” bathroom door sign and the Action Card zones sport a “?” for some reason.

Another dichotomy is the fact that the game system itself is very clever, with some unique card play mechanics that add narrative and excitement to the game. The Action Cards not only direct the action but also serve as the combat resolution system (that’s right, there are no dice used in this game) so they are wonderfully multi-functional and thus speed the game along tremendously well. But then there are the rules, which need to coherently explain this crafty system, but which are so vague and obtuse that it’s difficult to play the game straight out of the box without an accompanying myriad of questions and concerns. What is so odd about this is that the game is remarkably easy to play and yet the rules writing make it almost impossible to appreciate the elegance of the design.

Finally, SMG has wonderfully subtle details in the way each soldier’s characteristics reflect his individual personality and skills. Every soldier is a unique combatant with particular talents and shortcomings and each have a game-significant personality. But then when dealing with the effects of the skillfully drawn and nicely detailed terrain on the map, there are cases when these vibrant terrain features are physically present and directly affect the game – and then other cases in which these same features are to be ignored. In other words, it is precise and detailed in one aspect of the design and then oddly abstracted in other areas.

So what to make of this rather strange and unique breed of game? Well, I’m actually a huge fan for a few basic reasons: 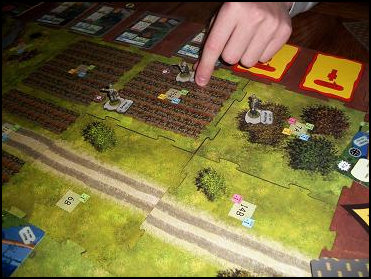 So the bottom line is, if you keep an open mind and simply “house rule” repair what needs to be fixed and/or re-interpreted, SMG’s problems can be easily overcome. And once you start playing the game without concern for the technicalities of the rulebook (which designer Jeff Billings, to his credit, is in the process of re-writing) and keep an open mind, this is a great gaming experience.

Be aware, though, that if you don’t like games that can handcuff you by the cards you draw (as with games like Combat Commander, etc.), then SMG is probably not for you in any case. But if a bit of chaos, lack of total control and simplicity is something that does not intimidate or offend you, then the Sergeants Miniatures Game is a worthwhile addition to your gaming stash.