Although GMT Games is known primarily as a “war game” company, Battle Line is really just a card game with military decorations. And I don’t mean that as a criticism. Quite the contrary, Battle Line has done the impossible: it’s a game that I can actually play with my wife! She has always tolerated my gaming without complaint, but has never expressed any interest in joining the fun. I finally got her to try Battle Line a few years ago, she beat me badly, and has been a fan ever since.

Impossible to interest your spouse in a game? Not anymore. As a matter of fact, my wife has since agreed to try other games. Mostly card games. And she mostly does not like them. But she tries them, thanks to her experience with Battle Line! Congratulations to designer Reiner Knizia for creating a game that my wife and I can both enjoy.

Battle Line is a table top card game and does not come with a map, but I thought I’d like to have a map so I created one. Please feel free to download a 4.4MB PDF file containing my custom Battle Line Map.

The best short description of Battle Line for the uninitiated is to say that, at its core, it’s a Poker-like game for two players. The game box description says it’s “for players 10 years old and up”. It used to be quite common in our hobby to see many strategy games marked “Ages 10 and Up” when, in many cases, the kid would have to be fairly precocious to actually be able to play (probably like anyone who is actually reading this). Nowadays, most games appealing to the mass market just show “Low Complexity” and leave it up to you to determine if your 10 year old genius can handle it. I think it is definitely playable by your average 10 year old, as far as just following the rules. But I think, on average, you’d need to be a bit older in order to really play the game well. As we’ll see in a few moments, Battle Line requires you to keep track of what is essentially nine simultaneous poker hands (plus some variants).

The setup for the game involves shuffling two decks of cards, one a large deck of 60 “Troop” cards, the other a small deck of 10 “Tactics” cards. The Troop cards all contain a number value and a color. There are six different colors (red, green, blue, yellow, orange and purple) with 10 cards in each color, numbered 1 through 10. The Tactics cards are not color-coded or numbered, but rather function like “wild cards”. Each one provides a special ability. Two of them are true wild cards (i.e. they can be used as if they were any color/number combination Troop card the owning player chooses) and others have special abilities. The Traitor card, for example, allows a player to steal a card from his opponent’s display area and transfer it to his own display area.

There are nine small wooden “Flags” (they look like tiny red bowling pins) that are set up in a row between the two players, thus creating the “Battle Line“. Each player will eventually place up to 3 cards on his/her side of the Flag (in what I call the “display area”), facing the opponents cards (see picture, below).

To start the game, each player is dealt 7 Troop cards. The first player, decided randomly or by player agreement, then places one card, face up, in the display area in front of one of the Flags, then draws a new card from either the Troop or Tactics deck. The next player then plays a card, placing it face up in front of any Flag (not necessarily the same Flag chosen by the first player). Players alternate in this fashion, placing either a Troop or Tactics card each turn and drawing a new card until one player can claim victory.

Players win the game by claiming Flags. A Flag can be claimed if, at the end of his turn, a player can demonstrate that the cards he has placed in front of a Flag, called his Formation, represent a superior hand (in a Poker sense) to the cards the opposing player has in his/her formation, i.e. in the display area in front of that same Flag (more about this, below). Once a Flag is claimed, no further cards can be played in front of that Flag’s slot by either player.

There is an “Advanced Rule” variant that says players may only claim Flags at the beginning of his/her turn, rather than at the end. This is a rule that I always use. I’ll explain in a bit more detail later in the article.

Victory goes to the first player who can claim 5 Flags total, or 3 adjacent Flags during his/her turn.

The Flag is awarded to the player who:

The different Formations are listed below, from the highest (most powerful) to the lowest:

In cases where both players have the same Formation, the higher card values win. For example, three “10s” beats three “4s”. There can never be a tie because in the event that two identical Formations appear to be shaping up, the player who completes his/her Formation first is the winner.

When a player claims a Flag, it is moved to his/her side of the table to show ownership.

Let’s consider a simple example where “Player Left” (on the left hand side) and “Player Right” (not surprisingly, on the right-hand side) are in the middle of a game. Both players have played 5 cards and now it’s “Player Right’s” Turn to play his 6th card. 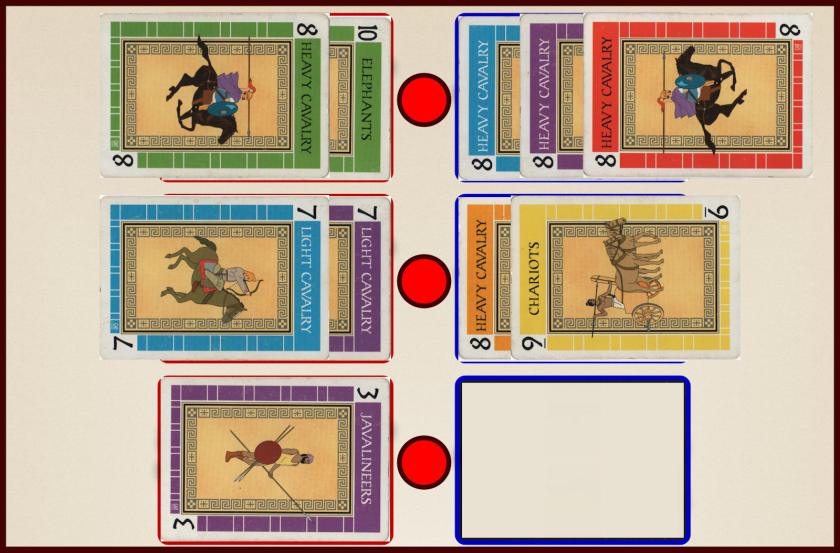 “Player Left” is working on a possible Wedge in line with the top Flag, hoping to pull a Green 9 card to complete the Formation. He is also working on a Phalanx against the middle Flag. Since there are only two 7’s visible on the display areas, we know that there are still 4 more 7’s in the deck (since there are 6 colors) so it’s reasonable to assume that one might be drawn. Of course, all four of those 7’s could be in “Player Right’s” hand, but that’s not likely. The most recent play was the Purple 3. It was dumped next to an empty Flag for lack of anything better to do.

FYI – Although all of the card numbers have associated names (i.e. 7’s are “Light Cavalry”, 3’s are “Javilineers”), I’m simply referring to them as “Purple 3”, “Green 9”, etc., for clarity’s sake. Sorry if that offends any Battle Line purists out there.

“Player Right” has already placed the maximum allowable cards (3) next to the top Flag, completing the Phalanx of 8’s. He is confident that “Player Left” will be unable to secure the Green 9 necessary to beat his 8’s. Alongside the middle Flag, he is working on a Skirmish Line (a straight). If he draws a 7 or 10 of any color, the Skirmish Line will be complete. Then he’ll just have to hope that “Player Left” does not draw another 7, thus completing his Wedge (three 7’s) and winning the middle Flag. 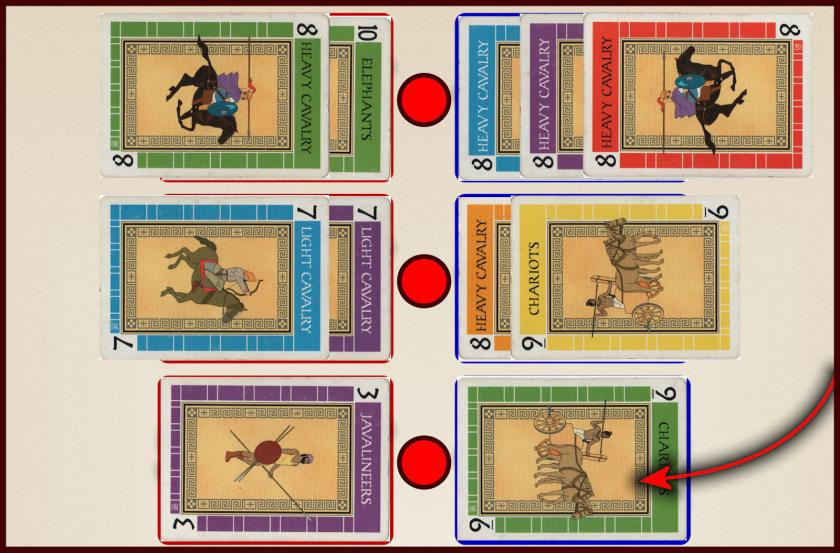 “Player Right” makes his 6th card play, placing the Green 9 down next to the unclaimed Flag (opposite the Purple 3). This move begins a Formation in front of a new Flag, but also serves a more important purpose. Now that the Green 9 is displayed face up in the display area, it is certain that “Player Left” will be unable to complete the Wedge (straight flush) next to the top Flag. Because this is now a proven fact, “Player Right” may claim the top Flag after this card play.

Note that even though “Player Right” had the Green 9 in his hand and he, of course, knew that he had it, he was not eligible to capture the Flag until he had publicly demonstrated that the Green 9 was unavailable for “Player Left”. 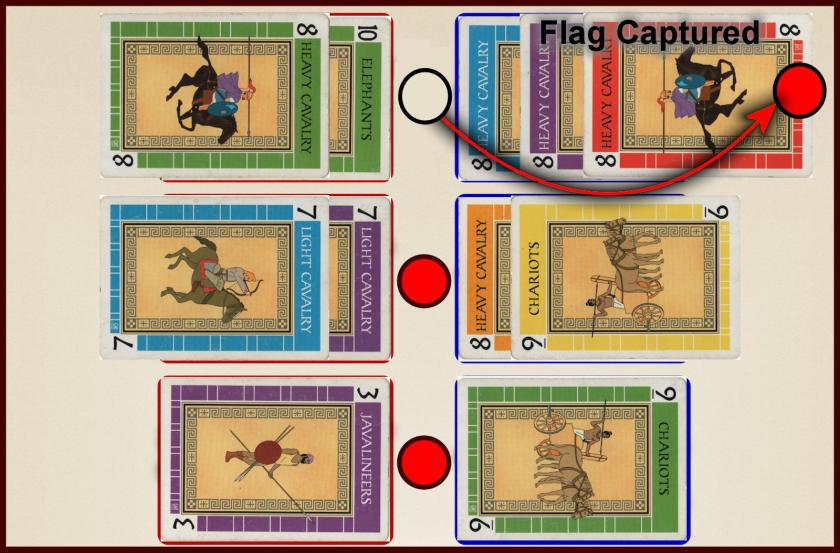 The introduction of Tactics Cards really takes the game up a notch. It’s quite an interesting game to play just as is, but the Tactics Cards give it an additional dimension and, I believe, should go hand in hand with the Advanced Rule that I mentioned earlier.

The following Tactics cards are available for play by either player:

The Advanced Rule changes the timing of Flag claims. The basic game allows you to claim Flags at the end of your turn. So, you can make a card play that secures a win for a particular Flag and then immediately claim it. The Advanced Rule only allows a Flag claim at the beginning of your turn. This means that your opponent will always have a chance to respond to your attempted Flag claim, and may possibly thwart it, before you can claim it.

In the example Flag capture illustrated above, if we were using the Advanced Rule, “Player Left” would have had a chance to thwart “Player Right’s” capture of the Flag. He could have, for example, played one of the wild cards (Alexander or Darius) next to the top Flag as the missing Green 9, thus putting himself in position to capture the Flag at the beginning of his next turn. “Player Right” could have then, in his turn, played the “Deserter” card to discard the wild card just played by “Player Left”. And so on and so forth. It really completes the game and makes it challenging to a veteran player as well.

I am a hard-core wargamer, preferring monster, hex-based, cardboard counter, encyclopedic rulebook games. Yet I love Battle Line. If I had one complaint about it, I guess it would be that it’s not totally portable. It doesn’t take up a tremendous amount of space, but it’s not something that you can play on a train, bus or airplane (or in the back seat of a car), like Blackjack or Poker. Too bad, since a lot of people I know have an hour long train ride to work each day. Maybe GMT will release the “magnetic mini” version someday.

But in all other respects, it’s a great game. It’s got enough depth to keep my interest, but it plays quick and lively, usually wrapping up within 15-30 minutes. Add in the fringe benefit of being able to finally recruit that special non-wargamer in your life, and it’s almost priceless (like the commercial says). I have purchased a backup copy that’s still sitting in the shrink wrap, so I’m backed up in the event of a Battle Line disaster. It’s probably my “most played” game right now, and I guess that’s the highest compliment you can give.