Here’s what you need to know before anything else. Games are what they are, and this is a solitaire game.  You aren’t going to outwit an opponent, you aren’t going to cheat anyone but yourself. And your battle is not against a rigidly advancing foe who follows strict rules, but against the luck of the cards.

You also aren’t playing on a hex grid map, but marching up toward the coast on 10 tracks, following a string of boxes the same size as your unit markers. They move up the track in just one direction until you hit the coast, and even after you sail away you aren’t really safe from German attacks until you get to England.  You can’t even throw new reinforcements into a key area and overwhelm the Germans. The best you can do is put your stronger units in good defensive terrain, flood some low lying boxes to slow the enemy advance, and – once a game – use some special markers to let the RAF rule the skies for a turn.

If all that puts you off, so be it. This game is what it is. Entertaining. Unpredictable. Never the same twice. And, of course, a challenge. And fun. 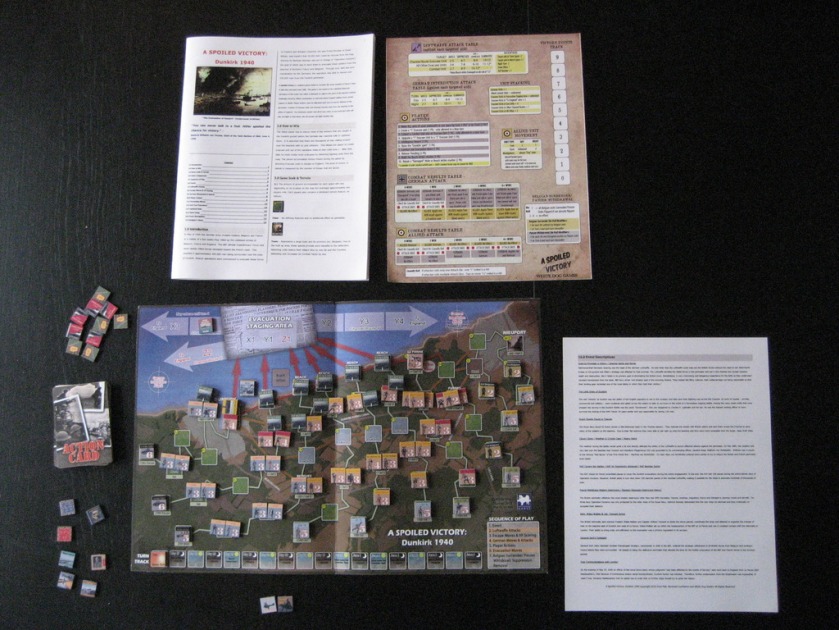 Because your options are limited, every choice becomes important. And, as you run through the turns a couple of times, the goals of the game start to become tantalizingly close. And maybe out of reach until the next turn.

Along with the rigid order and the relentless German advance, there is a lot of thought and more than a pinch of creativity on that seemingly rigid board of squares and the colorful cards that drive events.

It’s easy to get the hang of the rules, and the game moves quickly once you get used to following the order of play – Events phase, Luftwaffe attack, German Move and Combat, British (and French and Belgian) player Action and Evacuations.  The goal is to get as many troops as possible to England.  And it’s not easy. Your moves as a player are limited, but so are the moves for the Germans. There are 10 initial German Army units in the set-up hexes. What saves you early on is that, in most cases, only two or three of those units will move in any turn.

But the German army is inexorable. Some of the units will be moved every turn, and it’s hard for the Allies to stand up to them in combat. Of course, if they do, the beaten-up German unit will be reduced and have a horrible game, losing many of its future combat rounds. The upside for them is that they never die.

So, how did the designers keep this from becoming a game that plays itself and just brings you along for the ride?

It’s All in the Cards

There are 36 action cards in the game, each one with five different activities listed that tell you what to do for each side. They are played in a strict order, and any special event happens before the regular actions. Those, in strict sequence, are the Luftwaffe attack, the German move, information about how many actions the British-French-Belgian player can take, and finally how many units can be evacuated. That evacuation is the only way to generate victory points.

But the action cards do a lot more than that. The Luftwaffe attack line tells you where the aircraft strike and the German action line tells you which units to move. You can use Allied player actions anywhere you like, but they are used differently during day and night turns.

And, for me, one of the best things about this game is how random things are. Shuffle the cards and turn one over for the starting event. Then turn over the next card for the Luftwaffe attack. Do it again to see which German units are moving – and since the card order changes with every shuffle, there is no way to predict what the enemy will do next as you fight to get your troops off the beaches and the canals, and into the water for the second part of your escape.

There’s another thing – a bit of Psych Ops. Because you see every card, you see all the things that could have happened if every one of the five orders was executed. Go through half a deck and all those possibilities are dancing around your brain, and the pressure to get off the beach before something really awful happens to your troops just grows and grows.

A final point.   I didn’t know much about Dunkirk before I played this game other than the general impression of chaos, determination and a remarkable escape by the allies. Some interesting facts come out as you play the cards, interesting enough to make me want to read more.

The only thing that could make those all-important action cards better – at least from my perspective – is if they were printed on a little stronger stock, or maybe if they were laminated. Oh, well, you can’t have everything. And you can always buy a laminating kit somewhere if you feel strongly enough about it.

A Spoiled Victory divides pretty neatly into different parts. Day turns and night turns. May and June. And there are some important differences between those two months to keep in mind as you work your way to the end of the game.  The only way to win is to get points for getting evacuees to England. The more you get away safely, the higher your score will be.  You start the game with some evacuees on the shore and on the canal line just off the beach. You can also make more evacuees in May by using a player action for each one you take from the counter pool. In June, you have to make evacuees by converting troops on the beach or the East Jetty. There are stacking limits to be followed when you do it, and you can’t create evacuees out of troops that are suppressed.

There are two other limits to how many evacuees can be created. One is the counter mix – there are just so many evacuee units, although you can re-use the markers once they get safely to England. There is also a limit to the number of player actions you get from the current card, which gives you a choice of moving your troops toward the evacuation zone, creating more evacuees or getting the ones already at sea to England.

There goes your simple holding action.

There are other challenges as well. While British combat units can be converted to evacuees on any eligible turn in June, the French can only do it starting on the night turn of June 2. Belgian units – and you only have a few of them – can never become evacuees.

You have to keep the rule book open to make sure you didn’t miss something, at least the first couple of times you play. There are some subtle things that help the allied player, and some that will hurt. You don’t want to miss doing them, because it can change the victory margins of the game.

I’ve played Spoiled Victory three times, and it has been a different game every time. Maybe because I’m getting more familiar with the interplay of the rules, maybe it’s because I’m planning my moves better. More than likely, it’s because I’m getting better dice rolls.  Of course, I have never been able to force any of the German Panzer units to withdraw – which only means flipping them over to the reduced side – so I do have some challenge to look forward to.

And, the next game could turn out worse. Who knows? At least I don’t have to find another willing player before I get to try it again.