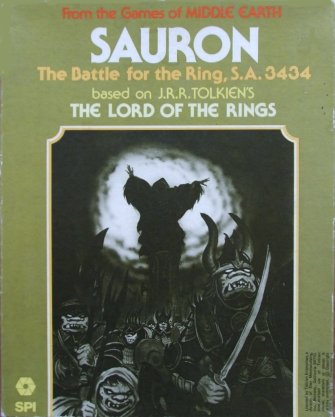 Long before the modern Hobbit craze, long before Peter Jackson, there were some books written by J.R.R. Tolkien, books in which he created his own mythology, dealt with universal problems of good and evil, and looked into the private motives and public actions of the powerful and the meek, the wise and the foolish.

Those actions and motives were really aspects of every human being, of course, and Tolkien did his work so well that the story of the Hobbit grew and grew beloved. His exercise in putting the essence of humanity down on paper – this was long before the films – required him to add dwarfs and elves and even orcs, brightening and polishing the parts of being human which needed a special mirror to see clearly.

For those who were never English majors, think of Spock or Data on Star Trek. Not human, certainly, but more human than most of the rest of the crew.

At least, that’s how I see it.

So, what does this all have to do with war gaming?  Let’s take a look at Sauron and ask some questions. I won’t give you the answer to the final question – is Sauron really a war game – because you should have the fun of figuring it out yourself or, at least, fighting over the answer.

For those who don’t know the game of Sauron – and I suspect that is a lot of people – it travels the same path that more recent War of the Rings games follow, with a full complement of Elves and Dwarfs fighting off Goblins and Orcs and trying to defeat powerful foes outside the gates of Mordor. There are no plastic figures, and no cards to turn over, just some cardboard counters and some dice and a simple map to create the most important battle in the history of Middle Earth.

The humans and their allies enter on the north side of the match, greatly outnumbering the forces of Sauron on the south edge, just outside the Gates of Mordor. The Westernesse Alliance outnumbers the initial Sauron forced by a 2-1 margin, and their archers have a range of three hexes.
On the other hand, the morale of many of their troops can be broken with a single spell, and their magic weapons don’t always damage their enemies.

On the whole, the all-powerful Sauron figure has a real problem, since he doesn’t come on the scene until turn four, and the Gates of Mordor only open when he goes outside to fight. That means his Wargs and Goblins can be killed off before his more powerful forces enter the battle, leaving his side dangerously close to demoralization and far behind in victory points. The rules even note this by allowing players to speed up Sauron’s reinforcements if both players feel the game balance is way off.

Once again, we see how powerfully the rules of a game shape the battle, and how tempting “table rules” are to bring balance to player of both sides.

But, the bigger question – can we really argue over rules to a battle that never was?

The forces attacking Mordor didn’t really exist which begs the question can Sauron really be considered a war game, since it has nothing to do with an actual war. Or does it?

Well, in some ways, it really does play more like a battle in the latter half of the 20th Century than an ancient fantasy conflict.

The forces of Sauron don’t have fast-moving tanks; they have Wargs that can sweep across the board faster than anyone on foot. They also don’t have heavy infantry, but they do have Orc archers and Trolls, which are really dangerous and will usually win any hand to hand combat.

And the forces of Sauron don’t have a scientific edge, a technology that lets them move faster or strike with more accuracy. But they do have a sorcerer on a magic pedestal who can force opposing troops to quake in fear, or who can target or kill units at a distance, or do any number of nasty things to the enemy.

But, he can’t do it all at once…just one thing at a time. And, his magic is strictly limited. Sauron gets a certain number of magic points at the start of the game, and can use them whenever he wants. But, there aren’t enough points to do everything, and as the battle develops, those limited points are needed more and more.

Think Command Control, and setting operational priorities.  Or think rear area artillery, with many more requests for supporting fire than can be given.

Or just think Richard Berg, who had a hand in the development.

Even the terrain is fanciful – there really is no map or Order of Battle showing where the Battle of the Five Armies was fought, and what units were in it. And, there are no Eagles in this game, which is a blessing. The armies of the West are already too powerful. 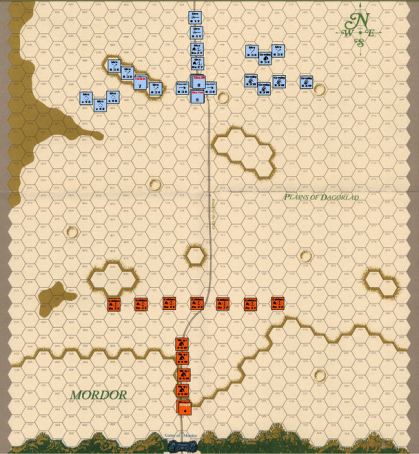 So, is Sauron realistic? Well, the Wargs can act like Wargs, running down the Road of the Orcs and taking out any Western forces foolish enough to try and slow the advance of the troops of Sauron. The humans and the Hobbits and the Elves and the Dwarves act strong and brave and heroic – at least until their morale is shattered by Sauron’s spell. It’s true to the book but has no basis in fact or in real life.

It’s tempting to see the Wargs as light tanks and Sauron as a heavy weapons unit, but that cheats them out of the roll they were designed for. A big part of this game involves morale, and Sauron has special magic that can destroy the morale of many Western units, taking them out of the game until a leader can restore them, with or without their magic weapons.

You can take this game apart in little ways – while the map is filled with impassible terrain hexes that look like the craters in OGRE, there were no craters described by Tolkien, and there was also no Road of the Orcs to help speed the armies of the West to battle.

But you can take apart real battles as well. Looking at it in a certain way, fantasy has a way of imposing itself on reality. If you need a reason to explain why some troops can win a fight at very low 1-2 odds, here are a couple of examples:

*  Why, except for evil magic, did lines of Union troops march unthinkingly to their death inside a large, deep crater blown up in front of them, with walls so high they could never get out.

* And just how did George Washington manage to escape from New York with the British Army just waiting to destroy him. And later manage to find some boats and cross that icy river between Pennsylvania and New Jersey and successfully attack the Hessians in Trenton when many of his troops never got to the battle?

Clearly magic, or fate, or luck. Or, just maybe, there was a wizard among Washington’s troops from some New England regiment. 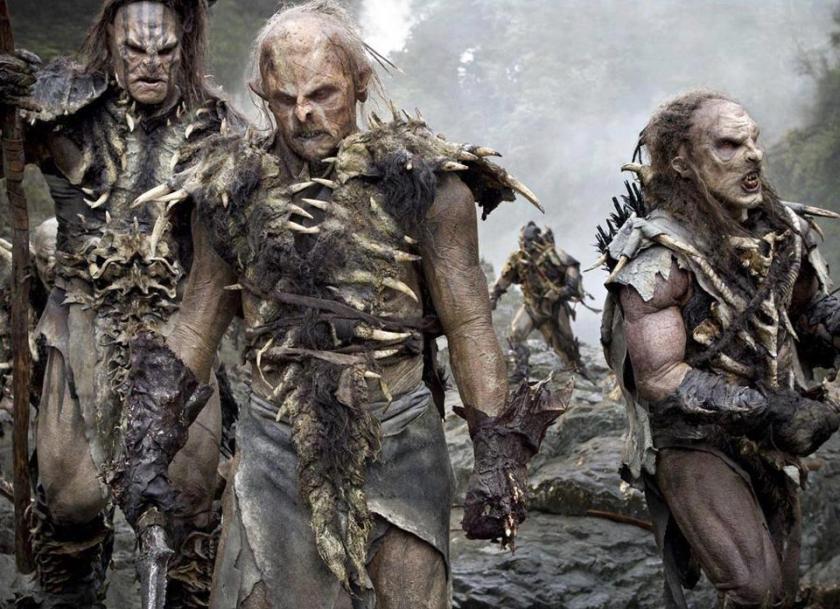 That’s where the question of whether Sauron is really a war game is born. War is certainly conflict, and war is certainly driven by powerfully-armed troops. But war is also about supplies and logistics and economic struggles. And, sometimes, logic plays a part. Sometimes it doesn’t. Let’s charge the enemy because we have almost no ammunition left, and so the left side of the Union line at Gettysburg holds.

In many war games, we focus on just one or two aspects of a battle. We play in sequences and break up fighting and movement, or allow troops to fire at any time, but impose a penalty on their movement or their accuracy when they do it.

You can argue that, for a lot of war games, the system works very well. You create the kinds of things that actually happened in a real battle, and compare victory conditions to actual results and see how well you did compared to the men who were doing the real fighting and dying.

You can also take an educated guess about the role played by luck. Fire a mortar and it won’t always land on target. Do it in World War II – especially using small mortars – and your shots end up somewhere in the general direction that you are pointing. It’s easy to set up a firing table to determine where shots might land and to roll dice to see where they do land.

That is, at heart, an accurate representation of reality, even if most mortar shots don’t land in quite the same place that the real shells came down. War games are realistic.

Or you can argue that no war game is complete and accurate without serious logistics rules – I actually wrote a set of rules to include that, and none of my friends would play with me for six months – and so every war game is an incomplete fantasy. 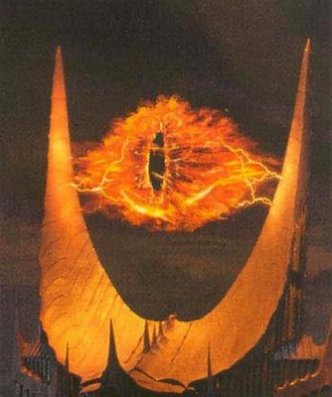 If that’s the case, the reverse may also true. A fantasy game can be a war game, just like any other war game. Your battle with knights and dragons may be just as valid as your fight with Tigers and Panthers, and maybe those dreaded KV’s.

So, take one side of the question or the other, and don’t worry about the little details that keep realistic war games from being completely realistic, or keep fantasy war games from losing their grounding in whatever alternate dimension they originally originated in.

But, answer the question. Is Sauron a war game?