Caesar XL, a board game designed by Joseph Miranda and published by Victory Point Games, is a two player contest set in the time of the Roman Civil War, from 50 BC to 44 BC. One player controls the forces of Julius Caesar and the other player controls the forces of Gnaeus Pompeius Magnus (aka Pompey the Great). Historically speaking, Caesar represented the Populares, a political faction that appealed to the people of the lower economic classes, while Pompey represented the Optimates, or established order, comprised mainly of Senators and landed gentry. To its credit, the game does not force you into these roles and Caesar may end up winning the game as the champion of the Optimates and Pompey the leader of the Populares. More about political victory conditions later…

The basic rules, or Bronze Rules, are very uncomplicated and easy to follow. The Silver Rules add a bit more depth and complexity to the game, but in my opinion (as well as the Publisher!) it still qualifies as a low complexity game. Good news for those just starting out in the board gaming/war gaming hobby or those hobby veterans that are trying to recruit new players. In my experience so far, a game takes anywhere from 45 minutes to 90 minutes to play to completion, depending on whether the game goes the distance (i.e. the full 14 game turns), or one of the automatic victory conditions are achieved sooner.

There are also Gold Rules available that push the complexity up another notch by adding even more realism, but I have not played using these rules and therefore don’t address the “Gold” version of the game in this article.

The game ships in a small 6″ x 10″ plastic zip lock bag and contains the following components:

While the components are not super slick, they are very functional and adequate for the game. The only gripe that I heard consistently was that the SPQR game cards were too small, only measuring 1.5″ x 2.5″, which makes them a bit difficult to handle sometimes. But the cardboard unit counters were actually a bit larger (5/8″) than standard hex game counters and the 11″ x 17″ map was not crowded or laid out in an awkward way. Could the map have been a bit “prettier”? Sure. But it was not an eye sore and in no way detracted from the enjoyment of the game. Oh, and they spelled “Mediterranean” wrong on the map. I think that just about covers the negatives.

The rules were clear, well organized, and concise. (I think this article is longer than the rule book) Actually, they were much more organized than is common in our hobby. Setting up and starting the game was a snap, and even the very first play through proceeded without a hitch due to the quality of the rules. There’s nothing more annoying than ambiguous rules and poor setup instructions, so hats off to Victory Point Games for a great job there.

After following the simple setup instructions on the back side of the game’s front cover, determining how much Gold (money) each player will start with, and drawing 2 random SPQR cards for Caesar and 1 random SPQR card for Pompey, the game begins with the Caesarian Player Turn of Game Turn 1.

For their initial SPQR Card draws (two for Caesar; one for Pompey): 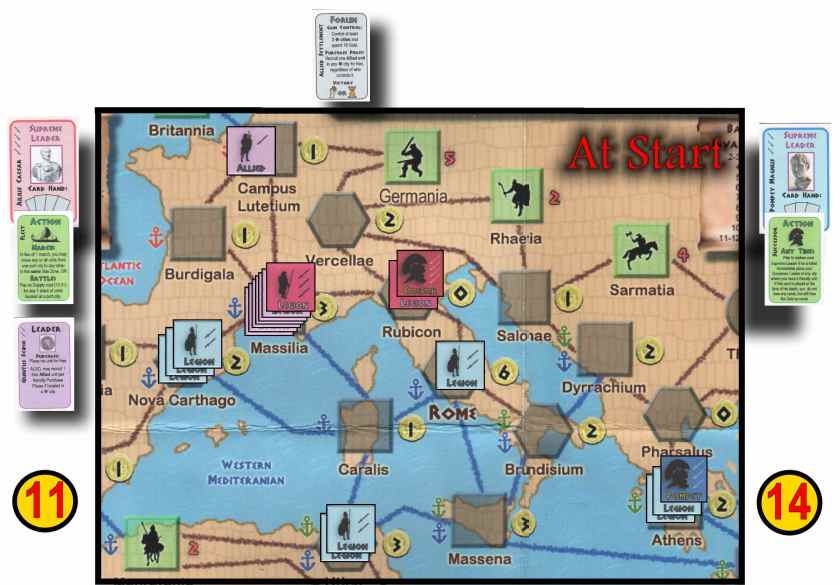 The first Game Turn is now ready to begin. The next section, below, is a walk-through of a very basic Caesarian Player Turn of Game Turn 1.

Caesar may declare Victory if conditions are met (more about Victory later). This being Turn 1, it’s not surprising that there will be no victory declared just yet.

There is only one card currently in the Forum area, the “Allied Settlement” card, so Caesar checks the conditions for claiming it. The conditions are that you must control at least 3 Allied Client cities (denoted by the circle) and spend at 18 Gold. At this point, Caesar does not control three Allied Client cities OR possess 18 Gold, so he cannot claim the Forum card.

In this Phase, an SPQR Card is drawn, for free, from the deck. Caesar draws another Leader card: Marcus Brutus. The card is held secretly in his hand until the Purchase phase. Up to two additional SPQR cards can be drawn for 5 Gold each, but Caesar is content with the free draw (in addition to being a little cash poor at the moment) and declines.

During the Purchase Phase, players may purchase combat units (the most common activity), make a Diplomacy attempt to convert a city or Barbarian Area to Ally status, or perform any other action specified on his SPQR cards for this Phase. Caesar first reveals his Quintus Scipio Leader card then places the corresponding Leader counter in Massilia with his stack of Legions. He then reveals the Marcus Brutus Leader card (that he just drew during the Draw Phase) and places that Leader’s counter in the same hex. Note that these Leaders could have been obtained and controlled by either player. If Pompey has selected their Leader card, he would have deployed them, blue side up, with his units.

Finally, Caesar decides to spend 9 Gold to purchase a new Legion and places it in the Rubicon Legionary Colony space along with Caesar and the veteran Legion. This purchase leaves him with 2 remaining Gold.

During this phase, income is derived from controlled cities, subdued Barbarian areas, and areas that contain a friendly “Ally” marker. Caesar can only derive Tax income from three locations: Rubicon (Gold Value = 0), Campus Lutetium (Gold Value = 1), and Massilia (Gold Value = 3). This nets Caesar a total of 4 Gold. However, he now controls the Marcus Brutus Leader who has the special ability (as specified on his card under the “Tax Phase” heading) to add additional Gold to Caesar’s treasury equal to the roll of one die. He rolls a 1 (big deal), which gives Caesar a new total of 7 Gold (2 current + 4 for cities + 1 for Brutus = 7 Gold).

Caesar may now move any or all of his combat/leader units. Each unit is eligible to move one space that is directly connected to their current location by a line. The Caesar Leader unit, accompanied by two Legions (one veteran) will “cross the Rubicon” and move to attack Rome itself. He must now decide what to do with the stack of seven Legions accompanying the Scipio and Brutus Leader units.

There are several good possibilities:

Getting into the spirit of being Caesar, our Caesarian player opts for “some combination of the above” and opts to send Scipio with the veteran Legion and three non-veteran legions into Nova Carthago, and send Brutus with the other three Legions to Utica, utilizing the “Fleet” Action card, which is then placed on the discard pile. Note that the Fleet card could not be used to attack Pompey directly in Athens since that city is in a different sea zone, as indicated by the green anchor symbol.

There will be three battles fought during the Combat Phase; in Rome, Nova Carthago and Utica. 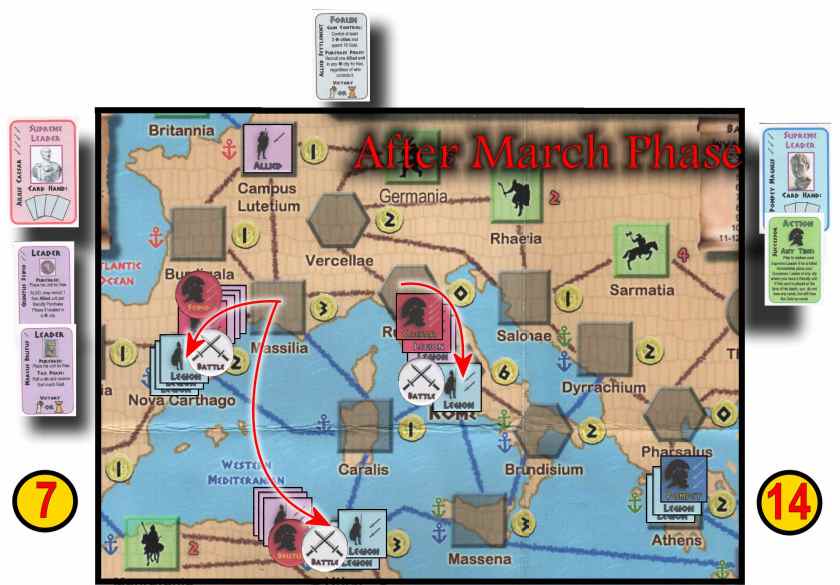 All combat is now resolved in the order of the phasing player’s choosing. Caesar decides to resolve the battle for Rome first. All units are removed from the map and the battle area is marked using the round Battle Marker. Combat, in Caesar XL, is resolved as follows:

If both sides refuse to retreat, another combat round will be fought. Eventually one side or the other will retreat or be totally eliminated.

If one side retreats, the opponent gets a (sort of) pursuit round. He rolls one die for every unit in the pursuing (non-retreating) force. Regardless of the actual strength of the unit, every die roll of 1 scores a hit on the retreating enemy units. So, it’s possible that a retreating force could be totally eliminated during the retreat process! 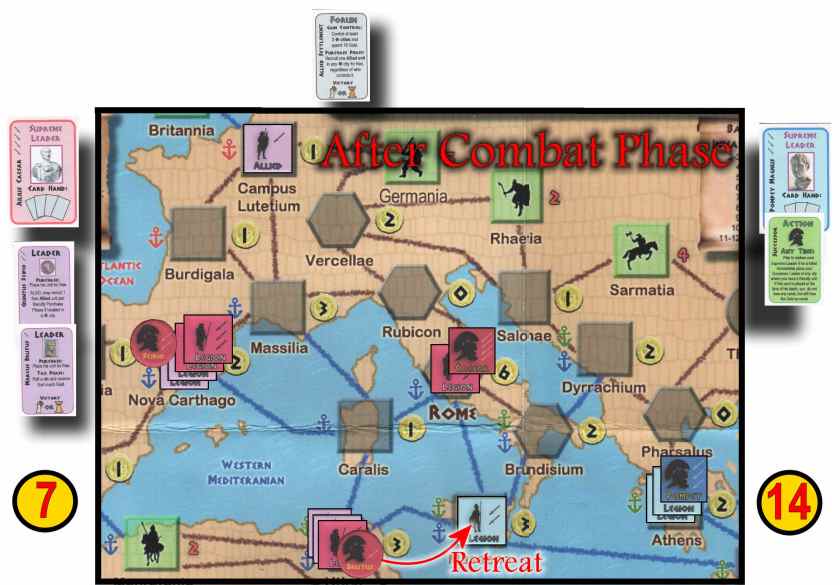 This ends the Caesarian player turn for Game Turn 1. The Game Turn marker is now flipped over to it’s Pompeian (blue) side and the Pompeian player now repeats the same sequence of phases, starting with the Forum/Victory Phase.

The Bronze and Silver Rules

The first few games I attempted were played using only the “Bronze Rules”, and they were all adequately competitive and enjoyable games. However, a few issues do arise using the Bronze Rules that don’t exist with the Silver Rules.

I recommend that you spend as little time as possible with the Bronze Rules before moving on to the Silver. I’m also looking forward to trying the “Gold Rules” in the near future!

Victory can be achieved in two ways:

Every Forum Card has three important pieces of information on it:

In addition to the Forum Cards, most Leader Cards also have Victory symbols on the bottom. One is a raised fist, which represents the “Populares” faction and the other looks like a chess rook and represents the “Optimates” faction. You must constantly be aware of the net total of these symbols present on all the Forum and/or Leader cards currently in your possession. You need a net total of seven of one faction or the other to win. For example, if you have 6 “Optimates” symbols in total, and 2 “Populares” symbols, you subtract the smaller total from the larger total to arrive at a “net total”. In the example just mentioned, you would have a net total of 4 “Optimates” symbols (6 Optimates – 2 Populares). If either player can achieve a net total of 7 symbols (either “Populares” or “Optimates”) during a Forum/Victory phase, that player wins the game!

Simple, right? Not so fast. While the rules may be simple, winning this game is quite a challenge and most of my contests so far have ended up in a draw!

Let me kick off the summary by saying that this is an incredibly enjoyable and addictive game.

In my opinion, the Political Victory rules are the catalyst that move this from being a good game to being a great game. The basic military aspects of the game are also interesting and challenging but, as with all board gaming activities that involve a lot of dice rolling, strange and frustrating results can occur. With the introduction of the concept of a “Political Victory”, you could be getting your butt kicked all over the Mediterranean due to your crappy dice rolling and still squeak out a victory if your opponent is not paying careful attention. The Political rules (theoretically) provide a mechanism that will allow you to win the game without ever winning a battle. I haven’t seen that happen yet… but it’s theoretically possible, and that’s good enough for me :-)

I am primarily a hard-core, half-inch-hex only type of war gamer, but Caesar XL really grabbed my interest… and held it! It’s the type of board game that has you mentally plotting the moves of your next game, within minutes after the current game is finished. All too many games these days, many of them beautifully crafted and polished, leave you feeling almost relieved that you’re done playing, but Caesar XL leaves you wanting to play again.

I highly recommend this game. All the gamers who played Caesar XL with me felt the same way, without exception. Apparently good things definitely can come in small packages! I look forward to playing more Victory Point Games and hope the others compare favorably with Caesar XL.