The great thing about a Weekday Wargame is that taking a full day during the week feels like such a treat. On Wednesday, Dec. 20, at around 11:00am, Marc, Rory and I gathered at Dan’s house for a day of gaming. Fueled by doughnuts, coffee cake, and other sugary goodness, we started with the GMT game Wellington.

This fantastic four-player game — admittedly a little long in the tooth now, but entertaining as ever — pits English and Spanish players against two French players (north and south, or as the counters are colored, blue and green).

It’s a point-to-point map. Markers and unit counters cover the Iberian peninsula showing who owns what space (regular, key, and fortress). Cards drive the system — you can either play a card for its action point value: move a stack for 1 point, recruit a strength point for 2 points, and so on; or, play it for its stratagem: swap strength points, get reinforcements, lose strength points for outside the playing area deployments, change political ownership of a space, gain a battle advantage, cancel a battle advantage, etc., etc., etc. — if you can think of an effect, there’s likely a card in there somewhere. Some cards are events: They take effect immediately and contain a similar variety of strength point effects.

FYI: The siege roll is a free action.

I’ve played Wellington a number of times — although I think it’s been at least three or four years since we spread it out on the tabletop — and it’s generally a close-run game.

We drew our slots randomly: Marc was British, I was Spanish, Dan was southern French, and Rory was northern French. Each of us possessed three generals. Although you didn’t need a leader to move strength points, per se, it was more economical in action points to do so. Wellington and Soult could drag around up to 9 SPs, while most others could haul around 6.

Each general sports a battle rating (extra dice to toss). Right at the start, I could feel the Spanish goose cooking faster than the Christmas goose at Tiny Tim’s house. Wellington was a 5, Soult a 4, the other French and British were 3s, or maybe there was a 2 in there, but the El Supremo Commandante was a 2, with a pair of 1s. Yep, Wellington by himself was worth more than all three Spanish generals. Stop snickering.

The scenario set up placed British in Portugal and into Spain conducting a siege of the French-held fortress Cuidad Rigo. The Northern French generally faced off against them while the Southern French faced off against the terrible, er, I meant to say terrifying, yeah, that’s it, terrifying Spanish. Whether they terrify the French or the Allied players is another story.

Marc (British) contemplates which card to play as Rory (Northern French) looks on during opening moves of Wellington.

The cards were shuffled and dealt and the game began.

A Turn (one year, starting in 1812) consists of a variable number of impulses: British, Southern French, Spanish, and Northern French. Play a card for points or stratagem, move troops, conduct battles and sieges, and then rinse and repeat until three players run out of cards.

Off we went, with the British prosecuting the siege and heading up the road to Madrid. The Southern French went for the year one Spanish knock-out strategy — capture all the fortresses and ‘key’ cities in Iberia by the end of the year. I forget how many key spaces are on the map (15 or so?) and about half are already under French control. Many of the remaining spaces have but one or two strength points (SP) of Spanish garrisons and some contain 3SP fortresses.

Here’s the French kicker: All French forces, including the lowly 1SP counter, get an extra two six-sided dice during a battle. So that 1SP Frenchy sitting all by his lonesome is really three d6s. This makes me very nervous because Spanish forces get 0 (zero) additional dice (the Brits get one additional).

The Spanish tried to survive and counterpunch where possible, but my scattered forces and a Soult with four extra dice made for a tough opponent.  I managed to save my Spanish force during one battle when Dan played an automatic 2SP loss card on me, but I played a ‘response’ card that grabbed his card and made it mine. He lost the 2SP, and thus, two dice, and after the battle, was forced to retreat. 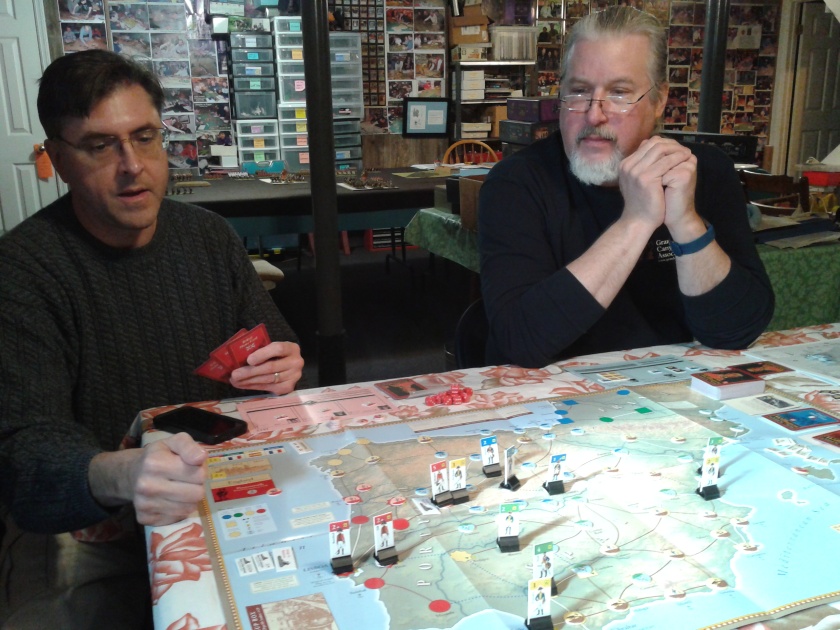 We made a slight error on one of the initial combats. When a force moves in and attacks and is forced to retreat, it retreats back the way it came. Dan actually retreated down a different path to pick up a 1SP garrison after being foiled in one attack. No biggee, but paying attention to that helps.

Bring Out Your Dead

In another impulse, I advanced my main Spanish force (with a lowly +1 general) against Soult’s force. I played ‘Leader gets too close to the front line’ card: roll 1d6 and look at the chart. Well, that chart had 50% chance of cancelling Soult’s 4-dice leadership rating, a 33% chance of dropping a die or two, and a 1 in 6 chance of killing the French general. Mumbling that I felt lucky, I tossed the die: A 6! Soult takes one through the heart.
During combat, only a 6 inflicts a 1SP kill on enemy forces, while a 5 disrupts 1SP of enemy strength. Those disrupts convert into kills during routs (cause 3 more SP hits than enemy does to you). I rolled four 5s while Dan rolled 2 5s. Sadly, the end result was that Dan took more hits and had to retreat, but didn’t rout because it was only two hits, not three, more than he dished out. 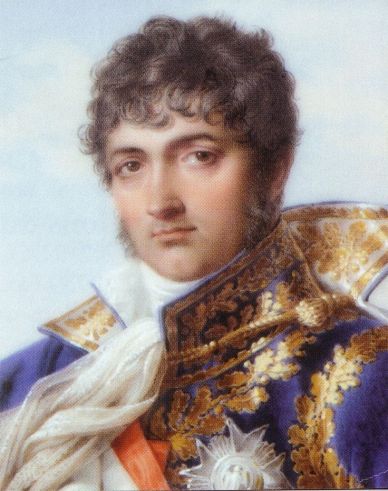 I got rid of Soult, but a few impulses later, Dan resurrected him by playing a card with a big 5 action points. Worse, Soult resurrects anywhere a Frenchy stood, so he didn’t even have to spend the action points to move him from France. For all that, and my adrenaline spiked when Soult took one for the team, ’twas only a minor delay. He didn’t even lose any capabilities.
To be fair, Wellington did the same thing later on. I guess ‘kill’ on the card really means he’s not dead yet…he’s feeling better…he thinks he’ll go for a walk..

Soult and company steadily captured Spanish real estate during the impulses. The British managed to capture Cuidad Rigo and Salamanca fortresses, but counterattacks drove them back, with a couple of battles causing grievous losses as the French sieged and retook the two fortresses. The Northern French drove north and took the key city of Oveido, only for Wellington to resurrect, march around the top, and take it back.

I played a card that allowed me to grab Barcelona (key city) without a struggle. Great. The British were supposed to shuffle a pair of SPs to reinforce, only they got so excited at grabbing Salamanca, they used their action points to push towards Madrid to disastrous effect and so the Barcelona garrison remained 1SP.

The French, and remember that a 1SP French unit tosses three dice, took Barcelona back and remained as a garrison.

I struck back with a 2SP move and a card than gave me two extra dice. That would mean my four dice vs the French three. Hey, you take opportunities where you can get them as the Spanish. During combat, Dan rolled his three dice and got three 6s! I got no hits or disrupts. Barcelona remained a French-occupied city.

By this time, the French, reinforced and with Soult back in charge, attacked my last southern key city: the fortress of Cadiz. My +1 General did all he could, but the entire Southern French army, including the other generals, hit my army and vaporized it. The only thing left was my +1 general fleeing in only his nightshirt. The siege lasted one roll and the French tricolor flew over the fortress.

The year (turn) ended with the French in possession of all Spanish key cities/fortresses except Oveido, which was tying Wellington down. It was not a French win, but we found out that Spanish guerillas were less than effective (die rolls) and reinforcements were unlikely to change the overall material advantage of the French. The peace roll was also ineffective.
We called it quits after this one year of impulses. We Allies conceded a French victory — and a well-deserved one it was. Wellington is still an entertaining game and one of the few card-driven wargames that keep me interested.

He is currently a freelance editor and writer covering financial and defense news, with a concentration on the retail industry. If you are really interested, go to Linked In, where he maintains a profile.
On the miniatures front, you may have seen his byline in various hobby publications in the 1990s and 2000s. Lockwood is also the author of: Snappy Nappy: Simple, Subtle & Ultrafast Miniature Rules for the Napoleonic Era, and, Hyperspace Hack: Ultrafast Spaceship Fleet Battles with Miniatures (both published in 2009 and available from http://www.onmilitarymatters.com and http://www.caliverbooks.com). Lockwood is also the editor of the Secrets of Wargame Design series, releasing the fifth volume in 2015.

Waterloo 200: A Board gaming Life Review

Legion of Honor – A first look by TheBoardgamingLife

Waterloo – An Utter Waste of Time

Small But Perfectly Formed – A Boardgamimg Life review of W1815